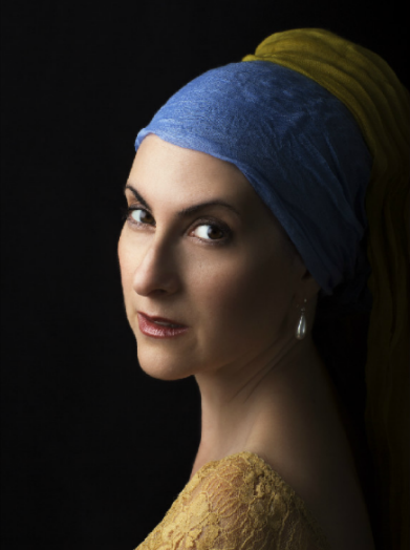 Portland Chamber Music Festival:
"I've saved the best, soprano Ilana Davidson, for last.  Her voice is both powerful and melodious, a more rare combination than one might think, and her portrayal of moods in the 11 songs that make up "Ayre" gives the juxtapositions extraordinary power.  She also has the vocal elisions of Sephardic and Arabic music down pat, as difficult a feat as singing the ornamentations in Handel."
-Maine Classical Beat

Bach's St. Matthew Passion with Duke Chapel Choir/Orchestra Pro Cantores:
"Soprano Ilana Davidson's first aria, "Blute nur, du liebes Herz!"  ("Bleed on, you loving heart") was a joy to hear; her limpid and moving "Aus Liebe will mein Heiland sterben" (Because of love, my Savior is willing to die") captured the believer's faith that continues when its ground has been removed (hence, in this aria, Bach leaves out the "ground," the basso continuo)."
-Classical Voice North Carolina

New York Festival of Song Debut:
"Mr. Becenti's The Obsidian Morning (2015) may be his first song, but with a cosmic text by Renee Podunovich, it proved extraordinary.  The soprano Ilana Davidson easily navigated the vocal line's vertiginous leaps and amazed spoken passages..."
-The New York Times

Mozart's Exsultate, jubilate with Ken Lam and the Brevard Music Center Camerata:
"Soloist Ilana Davidson is a very attractive singer with a lovely, lyrical vocal quality that blended extremely well with the small orchestra and projected effectively into the hall…there were definitely high points in the performance (notably the vocal cadenzas within the outer sections, each executed with technical finesse and lovely musicality)."
-Classical Voice North Carolina

"Where Light and Shade Repose" Season Finale of Chameleon Arts Ensemble:
"Scored with a similar sense of iridescence was 66 Times:  The Voice of Pines and Cedars for soprano and chamber ensemble by the Taiwanese-born composer Shih-Hui Chen.  There are four settings of Japanese poems (in translation), each of which compactly sketches the natural beauty and affective power of one of the seasons.  Here the concert's title seemed most apt, as each song masterfully balances illumination and shadow.  The third poem, "when the warm mists vale," is the shortest; it is sung three times by the soprano - the superb Ilana Davidson - and each time it gains in color, harmonic depth, and emotional weight.  The final song, after a fierce outburst, dissolves in a haze of percussion."
-The Boston Globe

Elijah with the Harrisburg Symphony:
"...the soloists reinforced what a spectacle vocal performance can be -- Grammy Award-winning soprano Ilana Davidson was particularly luminous as an angel."
-pennlive.com

Mahler #4 with Leonard Slatkin and the Detroit Symphony (November 2013):
"...her light-textured voice made a graceful evocation of heaven in the finale."
-The Detroit Free Press
"Davidson sang with plenty of feeling and longing..."
-classicalsource.com


"Included in the Tuesday evening performance was Two Songs for Voice composed by Johannes Brahms, written for his dear friends, Amalie and Joseph Joachim, a couple who had recently split.  Davidson gave full expression to the song of children slumbering in the wind.  Equally impressive were Davidson's performance within the set of American songs of Aaron Copland's Simple Gifts taken from his inspiring work, Appalachian Spring and her inspiring vocal sonority of the sounds of nature used for John Cage's composition, The Flower, written for voice and accompanied by Aizawa, providing the accents with sounds from a 'closed piano.'  She then completely won the hearts of the audience with her performance of Gershwin's lyrical By Strauss."
-Summit Daily (Colorado)

with Boston's Chameleon Arts Ensemble:
"Knussen's Hums & Songs of Winnie the Pooh owes alot to Britten's graceful melodic style, but he makes frequent reference to Pierrot Lunaire through instrumental effects for the vocalist and a rich palette of orchestral effects.  Still, why is his Seven Acre Wood so scary?  Soprano Ilana Davidson relieved alot of this musical tension through her effortless delivery and humorous interpretation of the texts.  With exceptional control in the high range, she dueled with both the flute and clarinet and blended seamlessly with cello harmonics."
-The Boston Musical-Intelligencer


Monadnock Music Festival, Previn's Emily Dickinson Songs :
"Everything, though was beautifully sung by soprano Ilana Davidson, who had a sleek, agile voice that seemed perfect for both works."
-The Boston Globe

Händel’s Messiah  at Duke University:
“Wynkoop  always  fields a group of fine vocal soloists and this year’s quartet was a royal flush!  Soprano Ilana Davidson was an elegant, polished singer with a winning tone and a very evenly supported voice across its range.  Her quiet singing was particularly subtle and her highest notes rang gloriously throughout the chapel.  All four singers could give master classes in perfect diction!"
-Classical Voice of North Carolina


At New York's Bard Festival:
“Berg on this program was represented by his iridescent treatment of a Theodor Storm poem, Schliesse mir die Augen beide.  Soprano Ilana Davidson and pianist Anna Plonsky were the superb performers, both of the Berg and of Ernst Krenek’s Durch die Nacht, a gleaming setting of poetry by Karl Kraus that proved to be another stunner.”
-The Boston Globe


Concert version Orfeo with Yoav Talmi and the Québec Symphony:
"Ilana Davidson as Amore, possesses beautiful musicality and the ideal timbre for this type of role."
-Le Soleil (Québec)


World-Premiere of Libby Larson’s Everyman Jack at the Sonoma City Opera:
“Soprano Ilana Davidson, as the young girl, had a voice of lyric beauty that soared off the stage, and she moved with the grace of a ballerina."
-The Sonoma Index-Tribune

Ernest Krenek Lieder CD:
“Davidson is a frighteningly strong singer, but there is subtlety to her voice, too, evident in the delicately shaded lower passages.”
-Time Out (Chicago)


Fauré Requiem with Thierry Fischer and the Charlotte Symphony:
"The music gained a more personal side from the soloists:  Soprano Ilana Davidson gave the Pie Jesu an almost childlike gleam."
-The Charlotte Observer

Scroll down for additional AUDIO/VIDEO 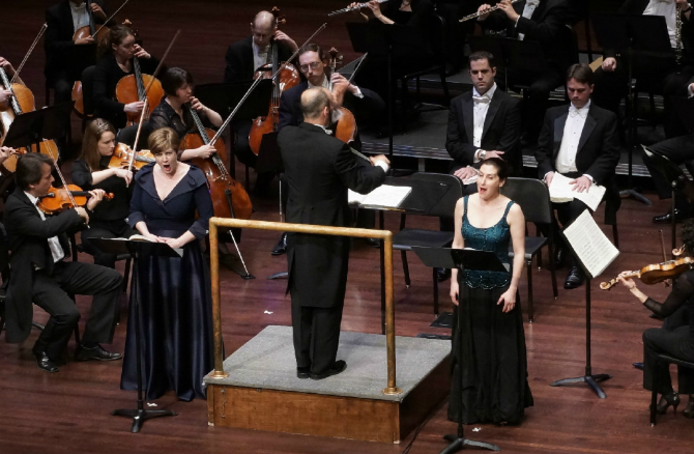 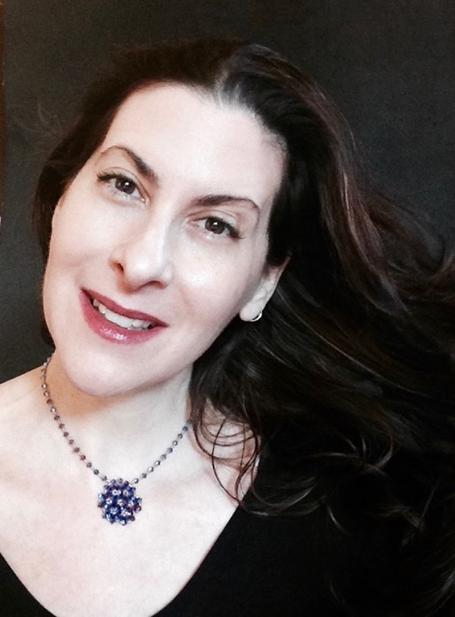 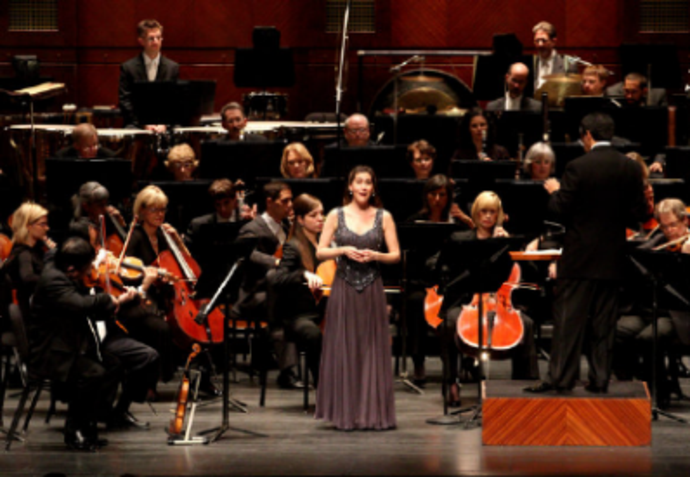 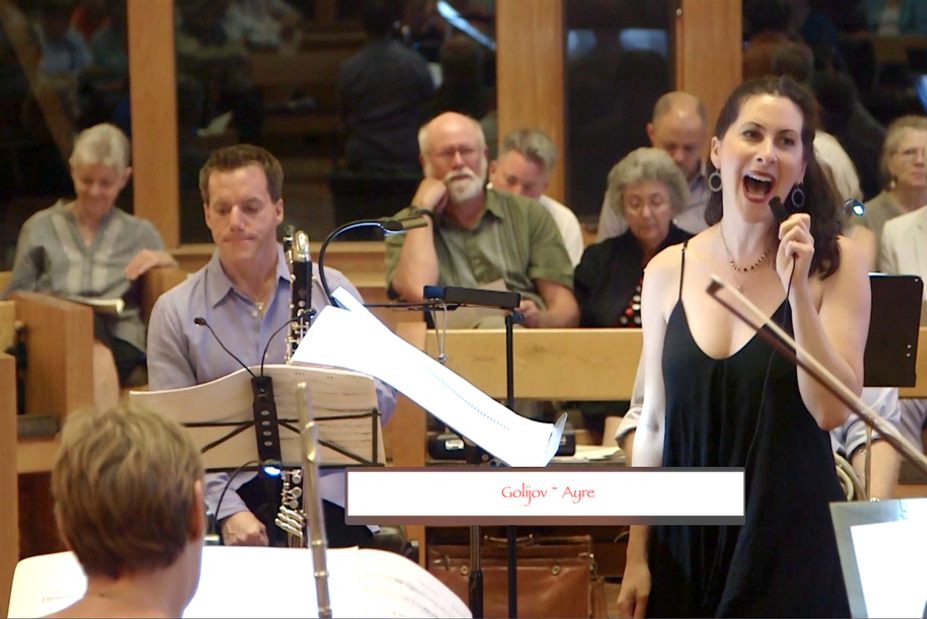 Ilana recently rertuned to the Berkshire Choral Festival in Haydn’s Creation, Mozart Requiem, Handel’s Messiah, Pergolesi Stabat Mater, Mahler Symphony No. 2, and 4 with Keith Lockhart at the Brevard Music Festival and with Lancing Symphony Orchestra. She also collaborates with Electric Earth Concerts, the Riverside Choral Society as well as the Riverdale Choral Society as Anne in Annelies by James Whitbourn and Ars Antiqua in works of Haydn.

Ilana has been featured on several commercial recordings including works of Bolcom, Krenek, Weill, Zorn, Britten, Elwood, and more. She has been recognized in several competitions, and was recently awarded a BRIO award from the Bronx Council on the Arts, and received the first prize in the Mostly Mozart Competition of Philadelphia and a Sullivan Foundation recipient.

Ilana received a Master of Music degree from the Curtis Institute of Music and received an undergraduate degree in Voice Performance from Carnegie Mellon University. Ilana is the artistic director of ClassicalCafé, a music series dedicated to bringing chamber music to intimate settings.​ 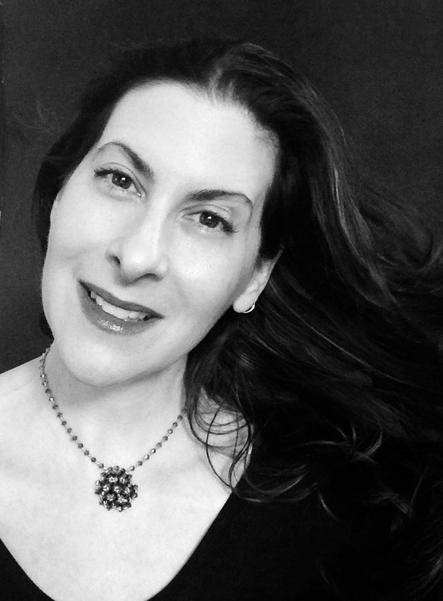 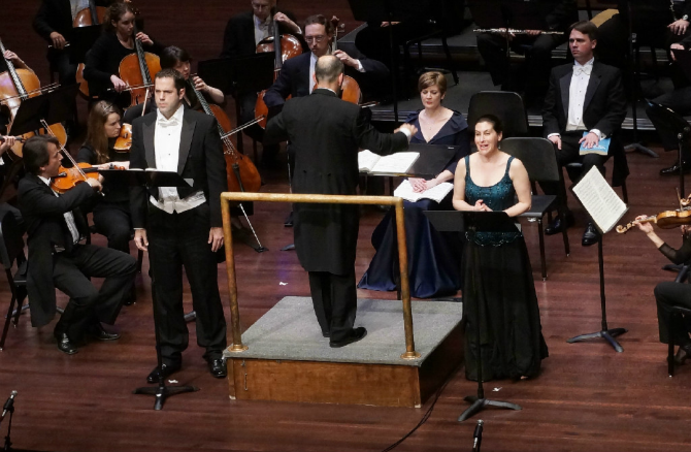 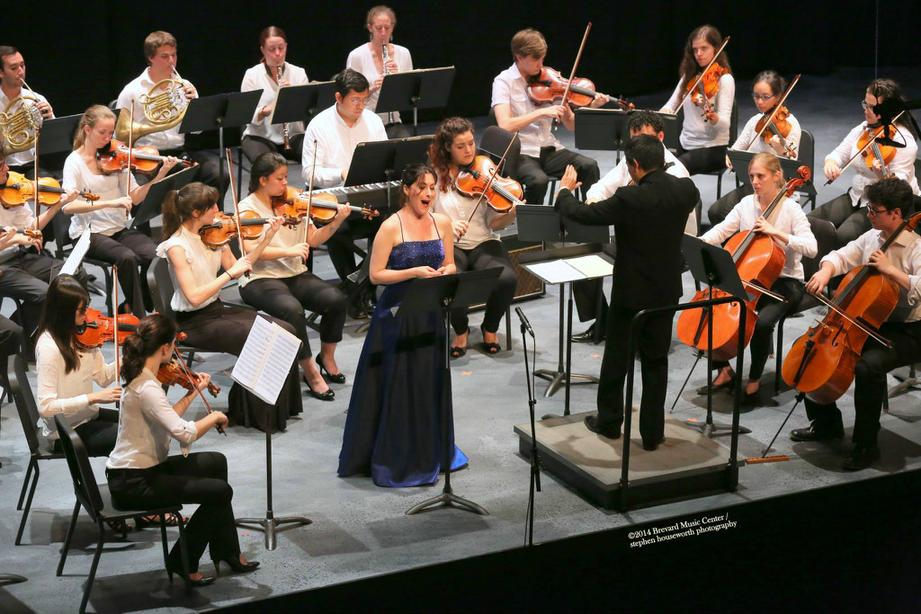 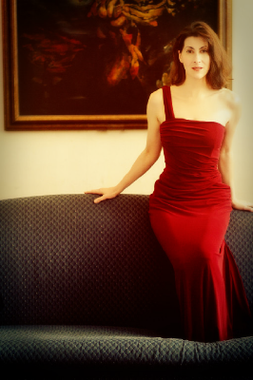 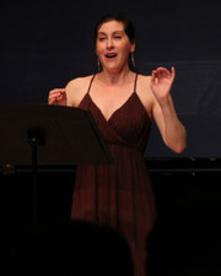 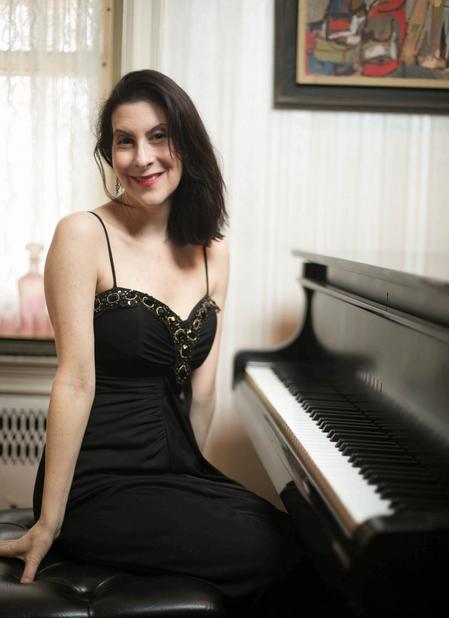 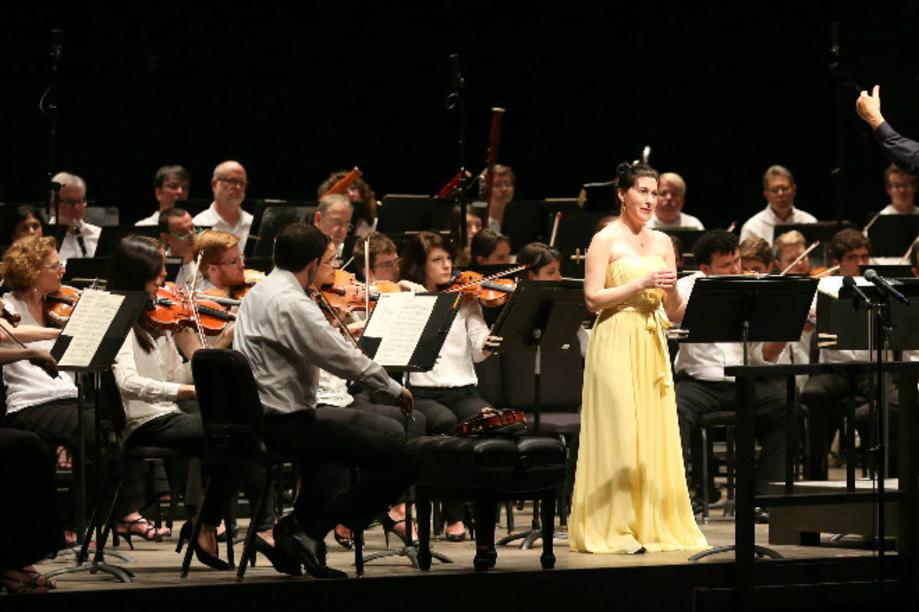 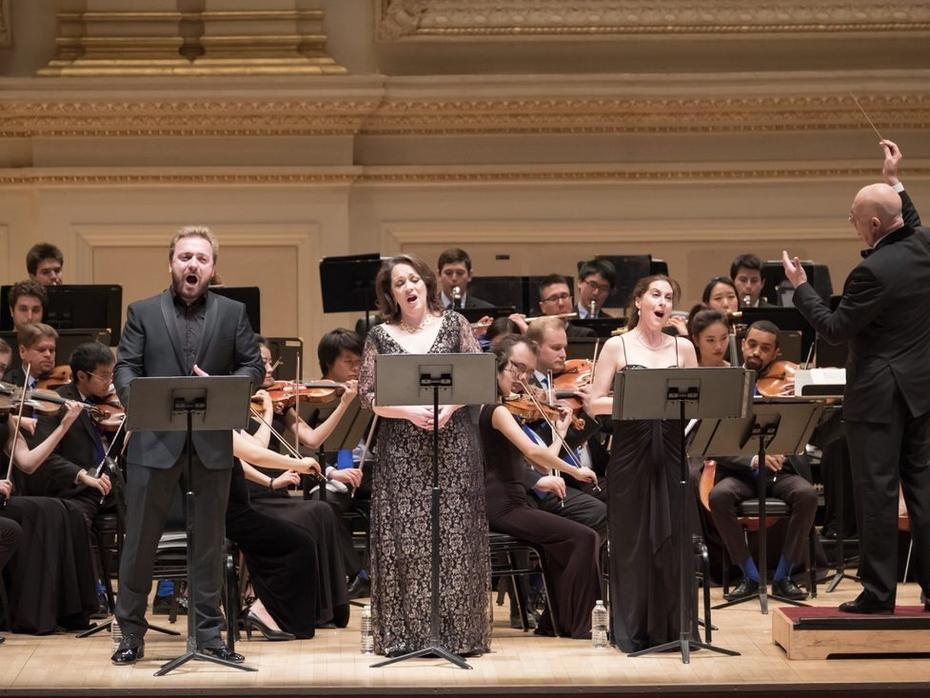