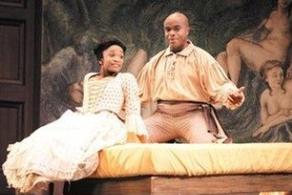 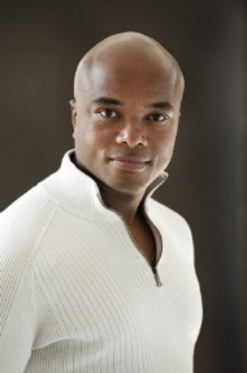 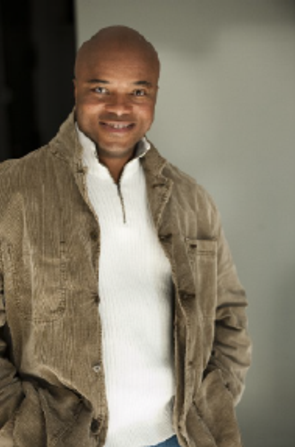 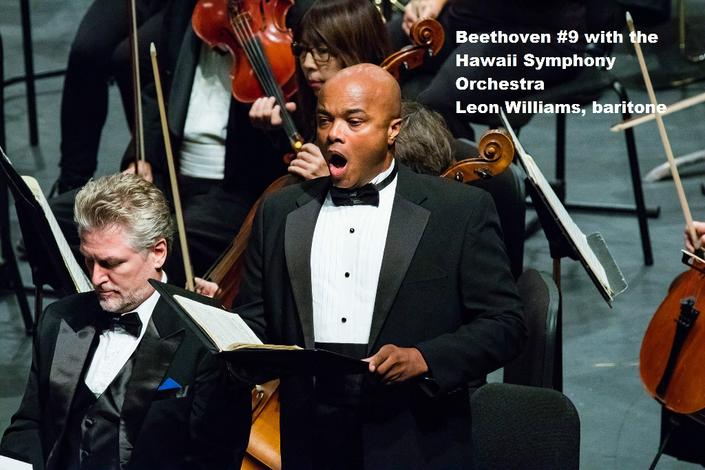 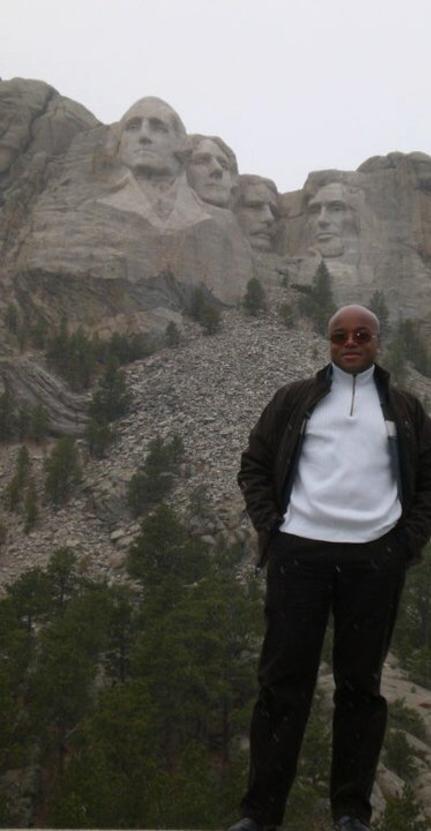 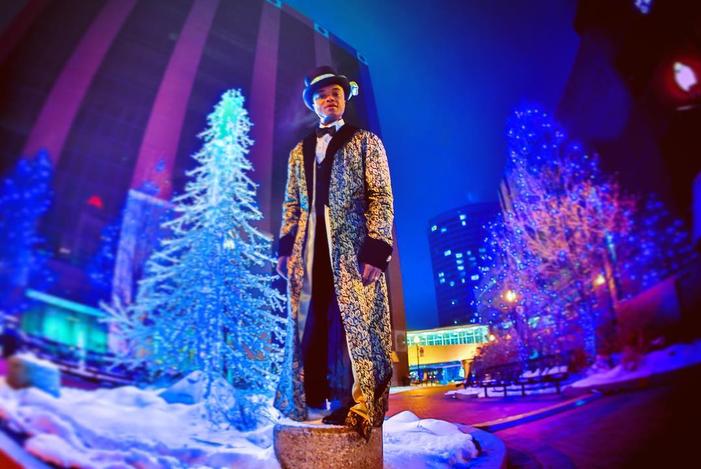 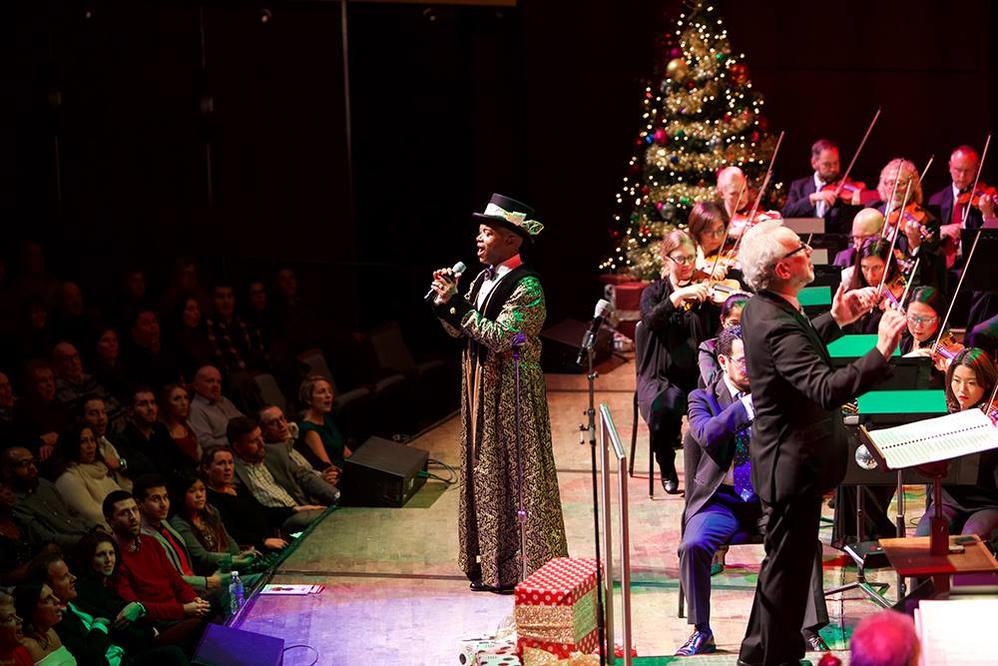 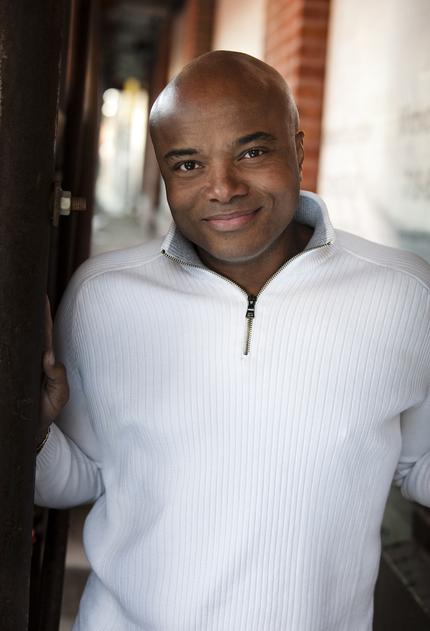 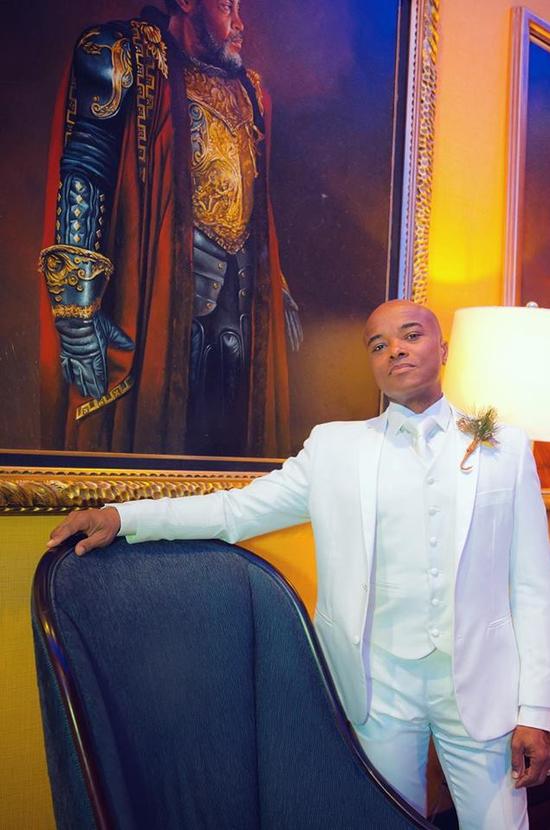 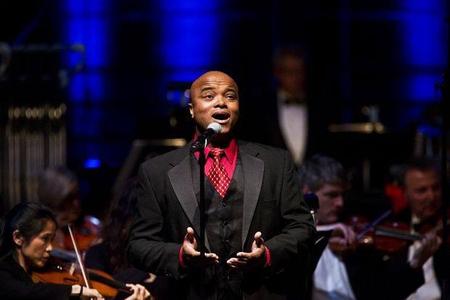 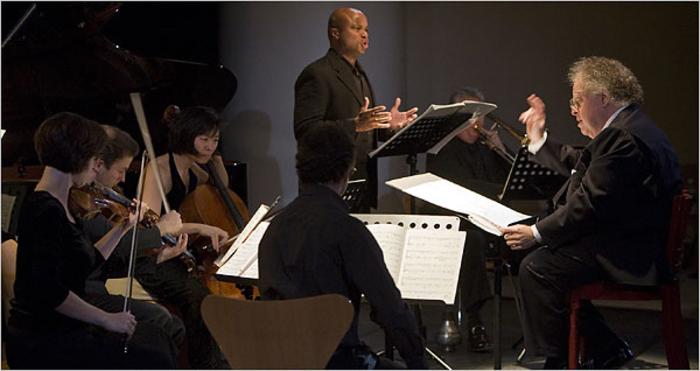 Britten's A Midsummer Night's Dream at Hawaii Opera Theatre:
"Leon Williams (Starveling/Moonshine) is a local favorite and it is easy to see why since he is a natural stage creature and has a rich, rolling baritone, seamlessly deployed."
-Opera Now


Christmas "Pops" with the Grand Rapids Symphony:
"Baritone Leon Williams, who appeared four years ago with the Grand Rapids Symphony for its Holiday Pops, returned to DeVos Performance Hall for his fifth outing with the orchestra. His past appearances also included singing Carl Orff’s Carmina Burana in 2007, Benjamin Britten’s War Requiem in 2008 and in Ralph Vaughan-Williams’ Sea Symphony in 2011.

Williams’ smooth, bright baritone was featured on songs such as O Holy Night, which sounded much as you’d expect, and on O Come, Emmanuel, which was an entirely different approach to an ancient hymn.

He sings with a well-honed, classical tone, but with a contemporary turn of phrase. Imagine if Nat King Cole had gone to The Juilliard School, which Williams did, and you can envision what Williams did singing When a Child is Born, a hit for Johnny Mathis in the 1970s…a rollicking gospel arrangement of O What a Wonderful Child with the chorus was a showstopper."
-Michigan Live

"Hungary Torn" with the American Symphony Orchestra at Carnegie Hall:

"Unquestionably, Dohnanyi’s Missa in Dedicatione Ecclesiae, composed in 1930 for the dedication of a Roman Catholic cathedral in Szeged, Hungary, was the most accomplished piece on Thursday’s program. The work’s prodigious construction speaks to a comprehensive grasp of musical history as well as an affinity for a Continental style instead of the folkloric sources that invigorated Bartók and Kodály. Shot through with imaginatively limned details, the piece proved worthy of resurrection on more than just contextual grounds....Four soloists — the soprano Janice Chandler-Eteme, the mezzo-soprano Jamie Barton, the tenor Brian Cheney and the baritone Leon Williams — sang those two unfamiliar pieces as if it were second nature."

Delius' Sea Drift with Stefan Sanderling and the Florida Orchestra [recording review]:
"Williams and the Master Chorale come to the fore in Sea Drift, which many regard as Delius' crowning achievement.  A setting of a section of Walt Whitman's Leaves of Grass, it is a challenging sing...the baritone brings lyrical smoothness and rich sonority to the tricky free verse, and his high notes (there are many) are clearly heard.  A frequent soloist  with the orchestra and Master Chorale, he has an innate theatricality and makes the tale of a seabird whose mate has vanished feel positively devastating as he mourns the loss 'uselessly, uselessly all the night.'"
-The St. Petersburg Times

Delius' Sea Drift with Stefan Sanderling and the Florida Orchestra (performance review):
"The story of a seabird that has lost its mate took on a tragic dimension in the performance by Williams, ending on a heart stopping lament, We two together no more, no more!, echoed by chorus, then two notes on English horn."
-The St. Petersburg Times

Haydn's The Creation with Stefan Sanderling and the Florida Orchestra:
"Williams shone in his dramatic, communicative performance of recitatives."
-The St. Petersburg Times

Porgy and Bess highlights with the Elgin Symphony:
"The dashing Leon Williams injected a touch of drama into his charismatic deliveries of It Ain't Necessarily So and I got Plenty O' Nuttin', animating his solos with just the right body language and gesture.  In duets, their voices meshed seamlessly without losing each one's distinct quality."
-Boca Jump Elgin

Vaughan-Williams' A Sea Symphony with the Grand Rapids Symphony:
"Guest soloists soprano Nassief and baritone Leon Williams were worthy choices, ringing out clear and true with strength in all registers and interacting well with orchestra and chorus alike.  Their brief unison on Caroling free, singing our song of God in the fourth movement was deftly done and led to a soaring chanting our chant of pleasant exploration before quieting to a marvelous passage with flute, clarinets, harp and solo violin accompaniment...Williams thundered when needed but also delivered well-supported, sweet octaves in the upper register during the quiet lead-up to the final dramatic  O, farther sail section."
-The Grand Rapids Press

as Papageno in Mozart's The Magic Flute:
"The singing was mostly good and in two cases excellent:  Leon Williams charmed as a resonant, full-voiced Papageno..."
-The Washington Post


"Leon Williams stole the show Friday with a fine baritone voice and comic timing that lent crispness and sparkle to a production sorely in need of it.  His lazy and cowardly bird catcher bounds nimbly about stage (even off it, at oine point), interacting not only with the other characters but with the audience and orchestra as well...The rat-a-tat timing necessary for effective comic dialogue was nowhere in evidence except in Papageno's case, but that came largely as a result of Leon Williams' own instincts."
-The Honolulu Advertiser

Title role of Mendelssohn’s Elijah with the Florida Orchestra/Stefan Sanderling:
“For a listener, when LEON WILLIAMS, in the title role of the prophet, makes his solemn entrance in the opening recitative of Elijah, it is as if you're poised at the top of an epic musical experience...WILLIAMS superbly communicated the text in his clear, expressive baritone.  A ighlight was the resonant warmth he brought to the aria It is Enough.”
-The St. Petersburg Times


Title role of Mendelssohn’s Elijah with the Honolulu Symphony:
“Majestically performed by Williams, a top-form baritone, Elijah’s seriousness and humanity came through with no hesitation.  Williams’ presence at times seemed as powerful as the entire chorus.  His reading of the role was not overly sentimental or effusive, as is often the case.  Instead his intense but warm voice is engaging in an elegant way.  In particular, Williams’ interpretation of the prayer Lord God of Abraham in which he asks God to make his presence known to the prophets of Baal, was moving and sincere.”
-The Honolulu Star-Bulletin

Anthony in Sondheim’s Sweeney Todd at Toledo Opera:
“The most elevated moments fell to baritone Leon Williams who, as Anthony Hope, stole Todd’s daughter Johanna and very nearly the show itself.”

Vaughan-Williams’ A Sea Symphony with the Florida Orchestra/Stefan Sanderling:
“…the symphony requires an epic flow from the orchestra and intense concentration on the text by the singers.  It also demands two standout soloists, and soprano Janice-Chandler Eteme and baritone Leon Williams gave lustrous bloom to their lines.  Williams elegantly captured the poetic mystery of On the Beach at Night, Alone.”
-The Tampa Tribune


Music of Charles Wuorinen with Da Camera of Houston:
“Baritone Leon Williams was the splendid soloist.  Excellent diction, a warm stage personality and firm commitment to music and text added up to a convincing argument for Wuorinen’s music.”
-The Houston Chronicle


Brahms Requiem and Opera Arias with the Springfield Symphony:
“Soprano soloist Janice Chandler-Eteme and baritone soloist Leon Williams were vocal jewels in the crown of the performance…Williams’ commanding, clear singing was well-suited to Brahms’ request in movement three, Lord, teach me the nature of my ending and the balancing response in movement six concerning the mysterious change that will occur in the ‘blink of an eye’ at the end of days…Both soloists were employed to brilliant effect in the concert’s first half, with Williams presenting a regal Hai già vinta la causa; Vedro mentr’io sospiro from Mozart’s Marriage of Figaro and Votre toast (the Toreador song) from Bizet’s Carmen…Williams entered into the physical drama of his roles as well as the vocal, pacing the stage in a flowing robe as Mozart’s Count and garbed head to in black, miming entry into Lillas Pastia’s tavern as Bizet’s Escamillo."
-The Republican 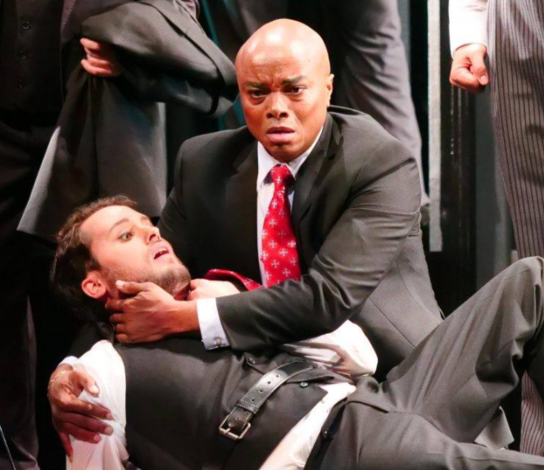 as Jake in Porgy and Bess 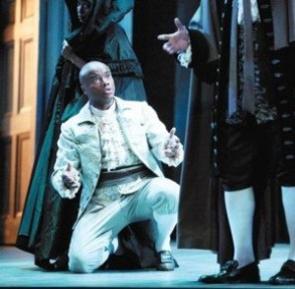 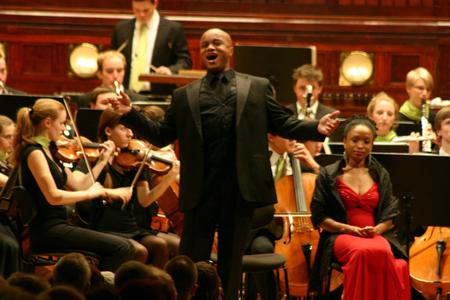 American baritone Leon Williams has performed  Mendelssohn’s Elijah (Honolulu Symphony and Florida Orchestra), Beethoven’s Ninth Symphony (Hawaii Symphony/Andrew Litton), Orff’s Carmina Burana (Florida Orchestra, Baltimore, Reading, Alabama, Lima, Westchester, Grand Rapids, Jacksonville, Hartford and Colorado Symphonies, National Philharmonic, and at the Berkshire Choral Festival); Vaughan-Williams’ A Sea Symphony, Britten’s War Requiem, the Mozart and Fauré Requiems and Haydn’s Creation with the Colorado Symphony;  A Sea Symphony with the Portland, Colorado, Grand Rapids and Illinois Symphonies and Florida Orchestra;  Fauré’s Requiem with Raymond Leppard and the Kansas City Symphony; Brahms’ Requiem with the Alabama, Springfield and Santa Barbara Symphonies;  Weill’s Lindberghflug with the American Composers Orchestra at Carnegie Hall; Mahler’s Rückertlieder  at Japan’s Sapporo Festival, and the composer’s Lieder eines fahrenden Gesellen and Eighth Symphony at New York’s Bard Festival;  Copland’s Old American Songs with the Warren Philharmonic, the Verdi Requiem with the Modesto Symphony and Lee Hoiby’s I Have a Dream with the Amarillo Symphony.  Among the other conductors with whom he has worked are Leon Botstein, David Lockington, Andrew Constantine and Marin Alsop.  As well-versed in “classical” and “pops” literature, Mr. Williams is celebrated for programs of spirituals, Holiday and popular standards and showtunes.   He appeared on Broadway and on tour in the musical Ragtime, and has been guest soloist on “Pops” programs with the Grand Rapids, Elgin, Stockton, Westfield and South Bend Symphonies.

Opera credits include Anthony in Sondheim’s Sweeney Todd  at Toledo Opera,  Papageno in Mozart’s Die Zauberflöte and the same composer’s Figaro at Hawaii Opera Theatre.  A much-in-demand Porgy and Bess principal, he sang Porgy with Yuri Temirkanov conducting in St. Petersburg, Russia;  Sportin’ Life with Markand Thakar and the Duluth-Superior Symphony and Jake in the Dallas Opera production, as well as for his Los Angeles Philharmonic  and Boston Symphony debuts, both under Bramwell Tovey.

Passionately devoted to the art of the song, Mr.Williams has performed Brahms’  Vier ernste Gesänge with Sarah Rothenberg and the Da Camera Society of Houston (to which he returned for a special program of the music of Charles Wuorinen, repeated at the Guggenheim under the baton of James Levine); an “Art of the Spiritual” program at San Francisco’s Herbst Theater; an all-American program at Japan’s Tochigi Music Festival and Maine’s Arcady Music Festival; and given recitals in Hartford, Pittsburgh, Princeton and throughout his native New York City, including Carnegie’s Weill Recital Hall, Merkin Hall (the songs of Richard Hundley) and the 92nd Street Y (a much- acclaimed all-Poulenc program with Michel Sénéchal and Dalton Baldwin).  Mr. Williams has won top prizes in the Naumburg, Joy-in-Singing, and Lola Wilson Hayes Competitions.  He holds a Master of Music degree from Juilliard and Bachelor’s degree from Westminster Choir College of Rider University.

His recordings include Frederick Delius’ Appalachia – Variations on an Old Slave Song with Final Chorus and Sea Drift with Stefan Sanderling and the Florida Orchestra on the Naxos label; The Art of Leon Williams, Leon Sings Noël and Handfuls (see:  http://www.watchfiremusic.com/artist.php?arid=34]. 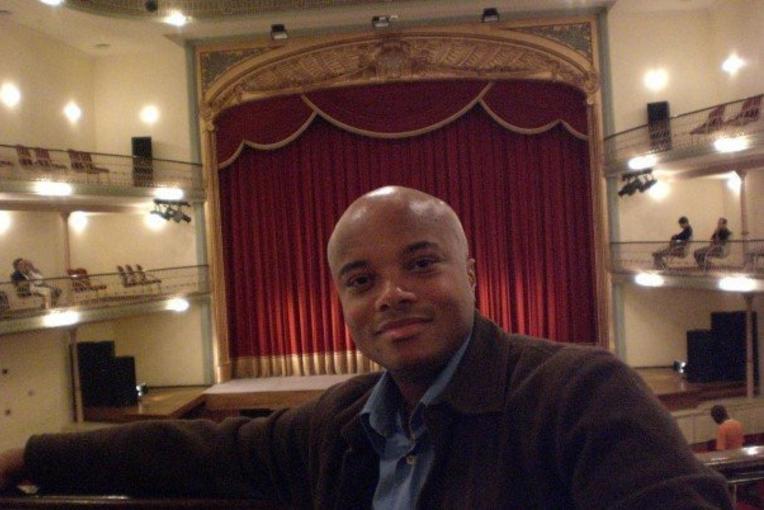